by Hailey Cady
in Tech
0

Remember high school lab experiments? Where experiments would likely comprise of a ‘control’ and a ‘test’ group. The test group being hypothesised to produce different results to the control. A/B Testing is similar to these lab experiments, except we’re testing design elements.

At its simplest, A/B testing is a method used to compare two versions of something against each other, in order to identify the most successful version. Such tests help in refining the details of the digital product. With each A/B test, a new set of data is generated that can be taken as reference to further optimize a website in the future.

A/B testing used to be something that only large businesses would practice. Cost-effective new platforms and SEO tools have made A/B testing more accessible for small businesses. Small businesses are saving money in a myriad of ways, allowing them to dedicate more money to improving their website.

Why is A/B Testing Necessary?

A/B testing enhances user experiences without obstructing user behavior. In other words, AB testing is a constant process that aims to improve user experience and conversion rates. For example: If a B2B company wants to refine its sales lead quality and volume on campaign landing pages, they will likely look to A/B test the following elements on their landing page: headline, calls-to-action (CTAs), forms and page layout. The graph below shows the positive effect of consistent A/B testing: 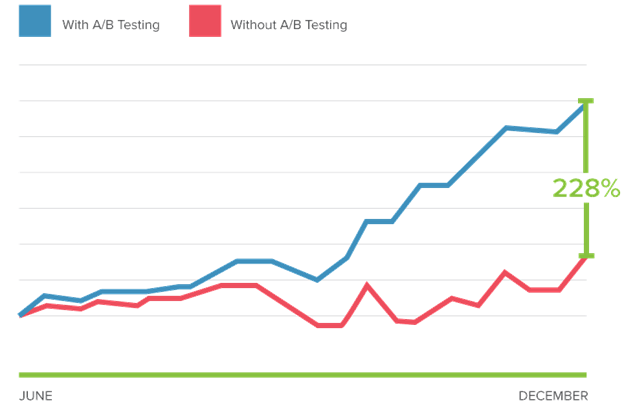 In due course of time, these changes can set course for more A/B tests that will optimize a website. This way, companies can customize their web design to include only those elements that have been proved to be worthwhile. A/B Testing is partly controlled by custom web developers and designers who create all the variables that will be tested as well as implement the most successful one. Common goals that analysts will set for A/B testing in an increase in user engagement, product onboarding and modals.

How is an A/B Test Planned? 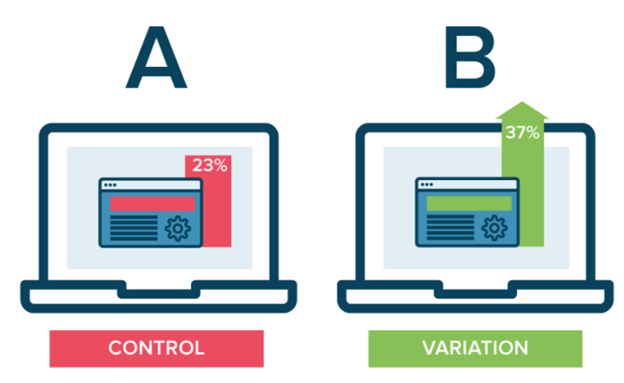 Just like every other test, an A/B Test plan begins with understanding the element you want to test. Offsite tests can either be ad campaigns or sales emails. Therefore, once you know exactly which ad is converting the best, it becomes easier to understand where you should invest your spending.

Step I: Where to Test

A basic A/B test involves analyzing a website or app and identifying a design element that could be improved. Here are some of the areas that may benefit from A/B testing:

●   Usability Testing – Sometimes there’s a particular area in user interaction that is causing many users to bounce. With A/B testing, you can not only identify the  troublesome element, but also find a practical and effective solution to either get rid of it or find a valuable variation.

●   Personal Pet Peeves – Data validation is important when it comes to trying new alternatives. Therefore, make sure that you include all the features that you’ve wanted to try out, backed with ample time.

While your outline of what to test would actually come from the above list, you also need to conduct your testing and moving onto the next step throughout the AB testing process.

Step 2: What to Test

According to InVision, it is important that the changes in an A/B test are limited to one variable. There are many leading A/B testing tools that have a visual editor to make these changes easy. 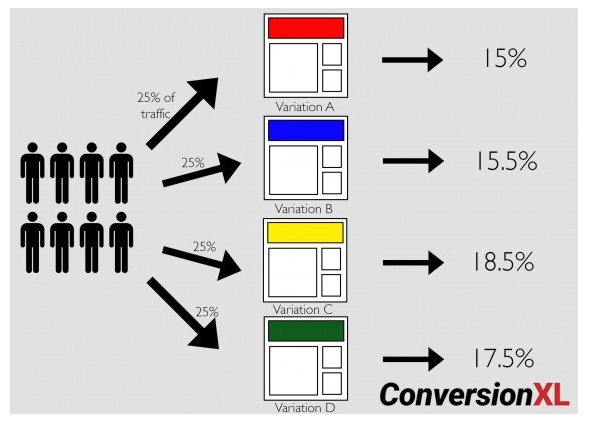 In the above image, you can see that the traffic is divided equally amongst the control and all of the variables being tested. It’s important to remember that the tests you do should have a key metric that you’d like to track, such as conversions, time spent on your page or bounce rates.

There are several tools and platforms on which you can run an A/B test, some of the most popular options are:

With these A/B testing process tools, the additional features may come as varied as any other features. Depending upon the flexibility, skills, and pricing an organization will choose different platforms. However, larger organizations may use multiple platforms to carry out A/B tests. This is because they have larger amounts of traffic to divide between multiple tests and a greater amount of tests provide more reliable data.

Step 4: How Long Should You Run a Test?

Tests are recommended to be tested over a 5 week period. If you are serving one variation of your page to a larger percentage of users, not only is this harmful to the credibility of your A/B test results, it may also be seen as a form of deception by search engines. Therefore, according to Google, you should update data regularly and remove all test variations from your website as soon as a test concludes.

Once the results are in, double-check the data you’ve received and ensure there have been no external factors that have sullied your test, maybe a competitor ran a large promotion for part of the test and you received a lot less conversions than you expected. Compare your results with any previous tests to get a more rounded perspective and draw your conclusions.

Many people may expect A/B Testing to be closer to a litmus test, where changes are drastic and immediate. But, it’s more about small consistent optimization over time. Big changes that boost conversion rates can happen, but don’t get your hopes up. Sometimes results will show no significant changes, don’t fret, discovering what doesn’t work is just as important as discovering what does.

A/B testing is one of the best ways to increase your conversion rates. With an equally continuous part of your marketing strategy, you can make lasting improvements to your website. SEO and A/B Testing go hand-in-hand, the right CTA buttons, headlines, color schemes and can be optimized as and when required. If you haven’t started yet and are looking for expert designers and developers, who can optimize your website, we suggest hiring a design and development firm in Indiana called CodeClouds. These folks have cost-effective solutions that have been recognized by platforms like Clutch and UpWork.

Why Do Dentists Need a Well-Rounded Digital Presence?

How to Maintain Solar Batteries in Oregon

What Are the Different Types of Solar Panels That Exist Today?

Why Do Dentists Need a Well-Rounded Digital Presence?

Alex Blackwell, a notable batswoman for both New South Wales and Australia, was born on August 31, 1983. She is ...

Introduction Cricket betting can be fun and profitable if you make smart bets. You can make money by betting on ...

Are you looking to improve your trading skills? Whether you are a day trader, swing trader, or just starting in ...